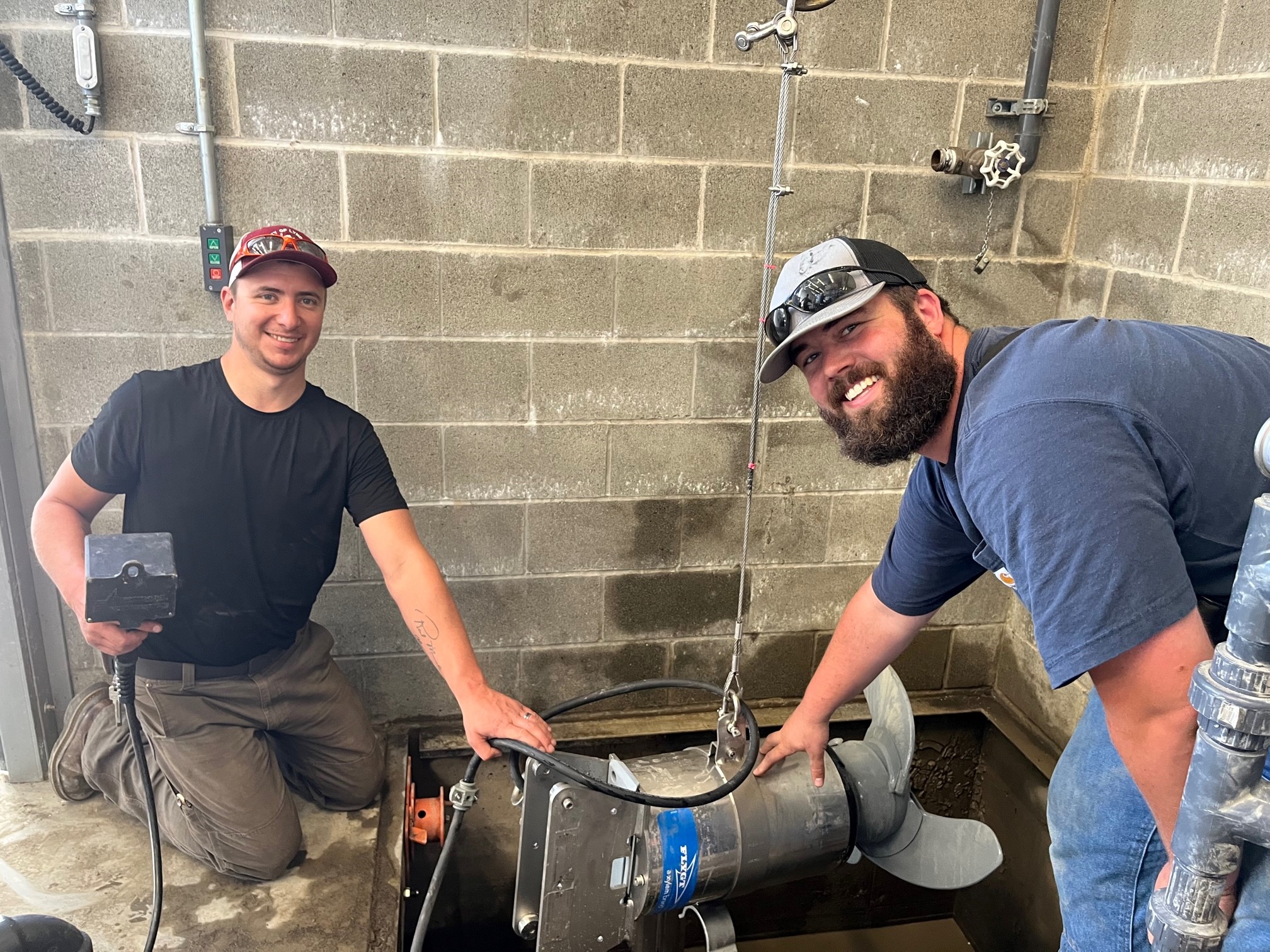 After launching a solids dewatering program for its surface water plant two years ago, the Lynden (Wash.) Public Works Department identified a problem. Residuals in the underground sludge tank were continually mounding 3 to 4 feet tall in the middle – a big issue when the tank is only 6 feet deep.

The existing pair of 2HP KSB submersible mixers could not keep up with the solids, which prevented the homogenous feed required for consistent dewatering. “There were giant mounds of sand in the entire tank,” says Mike Kim, superintendent of the city of Lynden. “We would clean it out, but it would fill back up with mounds a couple of months later. It was a maintenance issue, but it also meant we were not able to dewater the solids.”

Access to the tank, located under the concrete floor of the city’s water plant, is difficult, creating safety and maintenance concerns for the staff while performing the cleaning. And since water treatment residuals – sand, silts, alum and treatment polymers – settle incredibly fast compared to wastewater solids, the cleanout had to be done several times a year.

Kim turned to Laura Haggard of Whitney Equipment for options. The city needed a mixer that would overcome the settling mounds while keeping the liquid level at 5 feet to prevent cavitation. They also wanted to use the existing electrical panel without doing a lot of modifications.

WECI suggested replacing the KSB mixer with a bigger mixer that had a larger, optimized propeller design. The city chose the 4650 Flygt submersible mixer with 8.3HP motor and a new 4-inch mount. The compact mixer is designed for high reliability and low energy costs, along with 50% more power and thrust than comparable mixers.

“We decided to replace the mixers with Flygt because we know what we are getting,” Kim says. WECI had worked with the city to supply Flygt pumps in 14 of its 15 lift stations and the wastewater treatment plant. Flygt mixers had also been installed for two anoxic basins, beginning in 2016.

Kim says the support that Laura Haggard and WECI service tech Aaron Moser provided was really helpful. “We had received the mixer but at the last minute we were concerned we weren’t going to meet the minimum submergence for the mixer,” he explains. “We talked it through, exchanged numerous emails, and they provided justification and solutions so we could install it as low as possible.”

Maintenance crews are set to clean the tank for the first time, just shy of a year since the new mixer was installed. At the same time, WECI will install a second Flygt mixer on the other side of the tank. “It’s made a huge difference and I know it’s doing a better job,” Kim says. “As soon as the new year rolled around, I knew I wanted to order a second mixer to replace the other KSB.”